On Pomegranate Soup and Marsha Mehran – The Yellow Turmeric

Here is a recent review of Pomegranate Soup by Yellow turmeric

At one point in her book Pomegranate Soup, Marsha Mehran describes the tired faces of her lead characters as “Their drawn, exhausted faces had the look of torshi, pickled onions that have been pulled from their bed of vinegar and salt.” This is Pomegranate Soup in a nutshell for you. No, not the story of tired lead protagonists, but a story where food plays a pivotal role without overshadowing the main characters or their story. If you are not a fan of flowery words and food metaphors, then this might not be the book for you. But if like me, you find food to be the best form of expression, then this is your book.

I have always found food fiction a difficult genre. When it comes to writing or talking about food, I draw so heavily from personal experience that writing fiction becomes rather impossible. For me, food is as real as it gets. Pomegranate Soup is essentially the story of the Aminpour Sisters- Marjan, Bahar, and Layla, who move to a fictitious Irish town to set up a Persian Café. Where Pomegranate Soup and Mehran’s writing score is the omnipresence of food in describing emotions, highlighting significant events in the plot or sometimes as food itself. Every chapter begins with a recipe.There are also a number of interesting characters in this town, some welcoming of the sisters and their food, while others not so much. As we learn more about the sisters, we are also given glimpses of their past and how they escape Iran during the revolution.

I had never heard about Mehran or this book (which is also known as the “Iranian Chocolat” by the way) until I chanced upon it in a food fiction list. Similar to her characters in Pomegranate Soup, Mehran’s parents left Iran (where she was born), during the revolution and moved to Argentina. They started a café called the El Pollo Loco which means “The Crazy Chicken”, “where the heady smells of dolmehs and spicy beef kabobs were an instant hit with Argentinean locals”. (Source)

Mehran has also lived in Florida, Australia, New York and Ireland. She died in Lecanvy, a seaside village in County Mayo, Ireland in 2014, at the age of 36. Pomegranate Soup was followed by a sequel- Rosewater and Soda Bread. Mehran is also the author of “The Saturday Night School Of Beauty”.

When asked about writing Pomegranate Soup Mehran said she wanted to create something that would be joyous to read- “Nothing woven, textual, literary. Just something that would make me happy. Food makes me happy. When you cook for someone, you are extending your heart to them; that’s how Persians feel. You are trusting them with what you make.” (Source) 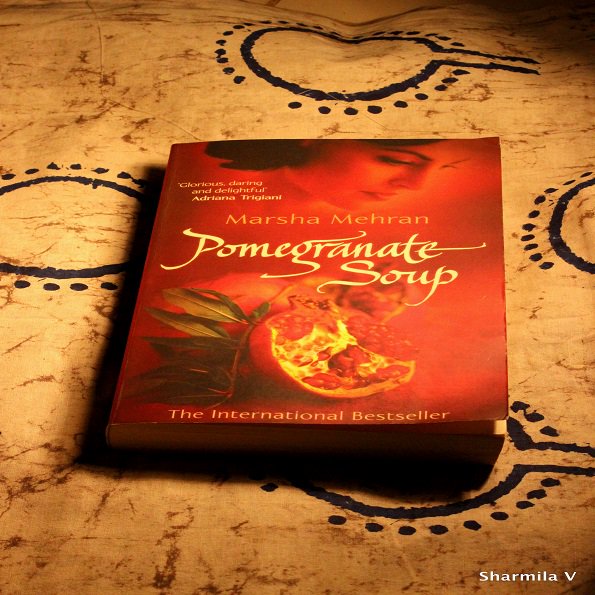